Quick Links
USB: The Basics
What Do I Need to Know About USB-C, USB-B, and USB-A Differences?
USB-A
USB-B
USB-C
What Is USB Used For?
How Has USB Improved Over the Years?
What Improvements Does USB-C Bring?
Are There Any Downsides to USB-C?
Final Thoughts
RELATED ARTICLES

The USB-C, USB-B, and USB-A differences are most obvious in their physical form, but the distinctions run much deeper. USB-C is a more versatile and powerful standard and is set to be the main connector for years to come. However, the range of USB connectors leads to possible confusion.

Read on to discover how all that changes with USB-C. Or find out how ViewSonic USB-C monitors can bring you a whole host of benefits.

USB is an industry standard for cables and connectors. Like any technology, it has progressed over time and had various iterations, with significant speed and power improvements. The first version was released in 1996, and the most recent speed upgrade is USB4, released in 2019, though it is not yet widely implemented. As the speeds have increased, so has the physical design of the connectors, and the latest form factor, USB-C, marks a significant improvement on USB-A and USB-B.

USB, or universal serial bus, is a protocol and hardware standard for digital communications. That means that the USB standard specifies both the actual form of cabling and connectors and the structure of the data that passes through them. The original standard was released in 1996.

USB’s primary aim is indicated by the universal of the title. That is, it originally hoped to standardize communication and power sources for computer peripherals. This universality has only recently come close to reality with USB-C, but even the initial iterations greatly improved earlier connection technologies. Before USB, users had to contend with an array of different, bulky cables and connectors, such as parallel, serial, VGA, and PS/2 ports for keyboards and mice, which notoriously had the same form factor but were not functionally interchangeable.

A particular advantage of USB over these previous connections is that it combines data and power, largely avoiding the need for independent power supplies for external devices. That means you daisy-chain monitors to have a seamless viewing experience.

USB interfaces also typically require no additional configuration of data speed, input/output addresses, and memory access channels. Thus, USB devices are much more interchangeable and can also be hot-swapped. This flexibility continues to drive improvements in the USB standard and its current model in USB-C. 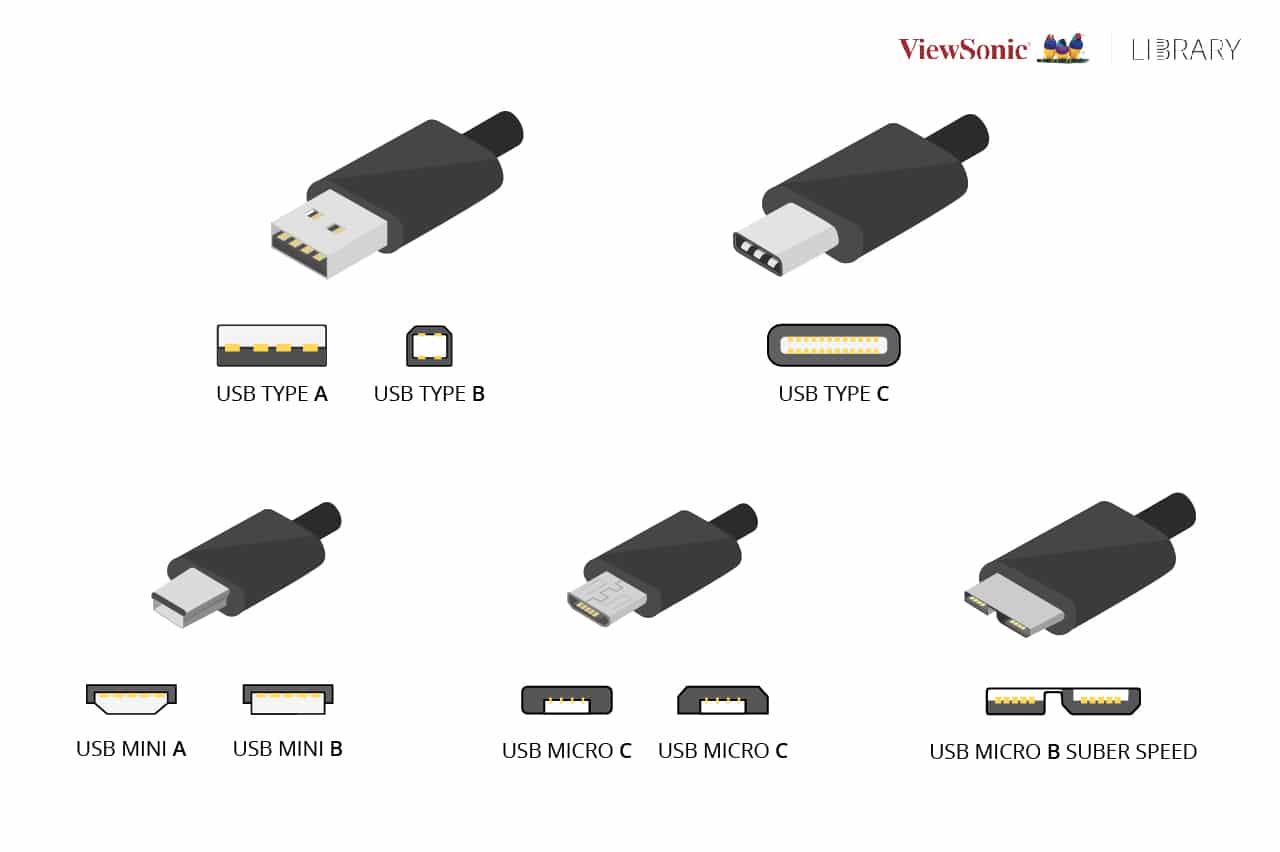 What Do I Need to Know About USB-C, USB-B, and USB-A Differences?

USB has had several different form specifications for its connectors. Originally, there were just two USB types, USB-A and USB-B. Now, USB-C is joining the game and now changing everything.

USB-A is the most commonly known USB type. The odds are you have plenty of USB-A connectors at home and you’re quite familiar with the way the look. It’s the cable with that one wider end. Only one, as the connector is not rotationally symmetrical and both ends are different, corresponding to a different type of port.

Just like USB-A, it’s the original designation for the two ends of a non-symmetrical cable. The differing form of USB-A and USB-B helps to enforce the mono-directional aspect of these iterations of USB. Data flow is bi-directional, but power may only flow from the host to the peripheral or receptor end and, therefore, the cable can only be connected in one way.

Furthermore, there are mini and micro versions of both USB-A and USB-B, which causes confusion because users need various different cables for basic use cases and may find it difficult to plug devices in for the first time. Or the second.

USB-C simplifies all things considered (we’ll explain that even more in depth later on). For starters, it’s fully reversible, so no matter what side you grab to plug, it’s all the same. Then, its bi-directional power capabilities allow for the power flow in both directions, having devices charge each other and power larger displays. Also, USB-C has better data rates which can drive high-resolution monitors. This point is a boon for all digital artists needing pristine sound and image production. Or anyone who seeks a plug-and-play connection for that matter. Besides, productivity and remaining in the workflow are also heavily dependent on having enough screen space, and USB-C provides just that. Work aside, USB-C monitors bring forth a high-quality home cinema experience.

The improvements are many, and we’re living in exciting times to see how USB-C can simplify our lives and work. Make sure you’re ready to make the most of it! What Is USB Used For?

USB was originally designed for computer peripherals: keyboards, mice, external disk drives, printers, scanners, cameras, and the like. However, mobile phones and tablets are among the most commonly connected devices using USB and flash drives since their earliest iterations. In addition, more recently, USB has become a versatile connector for audio and video devices like speakers, microphones, monitors, and webcams.

USB’s dual charging and data transmission capabilities mean that it can also be used solely for charging. USB ports on main sockets, adapters, and extension leads are now commonly seen for quick charging of mobile devices. How Has USB Improved Over the Years?

Since USB 3.1, which coincides with the introduction of USB-C, improvements have included the directionality of the cable. Previous iterations required specific ends for host and peripheral, whereas USB 3.1 introduced bi-directionality to match the bi-directional connector form of USB-C.

USB-A has a thin, rectangular cross-section and is generally used for the host end of the connection. Thus, USB-A ports may be found on laptops, desktops, media players, or game consoles. The original USB-B has a square cross-section with beveled top corners and attaches to peripherals like printers or external hard drives.

Miniaturized versions of USB-A and USB-B appeared with USB 2.0. These come in mini and micro versions and are more convenient for connecting small devices like mobiles and tablets. However, an issue with both the original, mini, and micro versions of USB-A and B is that the connectors are not rotationally symmetrical. This can lead to difficulty connecting as it may not always be obvious from the plastic housing which side is which. What Improvements Does USB-C Bring?

One of the advantages of the USB-C standard over its forebears is its support for the much higher data rates of USB 3.2 and above, but there are more features. First, USB-C is fully bi-directional. At the simplest level, this means that both ends of the cable are physically the same, so there is no distinction between host and receptor.

USB-C also does away with the variety of previous sizes found for both USB-A and USB-C. It is only slightly larger than the previous micro-B connector, meaning that it is suitable for various devices, from small mobiles and tablets to larger visual displays. This simplicity means USB-C cables are highly interchangeable, so users can store fewer cables. Of course, laptop and desktop ports can also be simplified.

USB-C’s reversibility entails bi-directional charging, meaning that, in principle, at least, it’s possible to charge any device from any other. Not only is the directionality a problem for older USB cables, but they also don’t support the same level of charging. However, USB-C now supports enough power for a laptop and other larger devices. While USB-A could only support up to 2.5 watts and 5 volts, USB-C now supports 100 watts and 20 volts easily enough for larger devices.

The practical benefits of this include pass-through charging; effectively a USB hub that powers laptops, and also charges other devices simultaneously. Additionally, laptops can be powered by portable USB-C chargers, allowing greater flexibility when on the move.

One of the bugbears of USB-A, the lack of rotational symmetry of the connector, is fully resolved in USB-C. That is, there’s no top or bottom – you can rotate the plug both ways. That means no more fumbling around trying to get the connecter the right way around since it works both ways. Anyone who has ever had trouble trying to plug in a USB device will appreciate the value of this.

USB-C can be used to replace a variety of other connectors. Older USB-A, mini-USB, and micro-B connectors are obvious candidates. Still, because of USB-C’s data transfer rates and power capacities, it can also connect more significant devices like high-resolution interactive visual displays. For example, USB-C supports 8K resolutions with 10-bit color and is a fine replacement for HDMI. Are There Any Downsides to USB-C?

USB-C is relatively new, so there have been some issues. Some early users complained that the standard is trying to do too much for all devices; an inevitable risk of bringing a universal solution into a complicated ecosystem. Since USB-C is a standard, actual implementations may vary, and they may not support all modes of operation.

However, these teething problems are no longer common. The tech community is always keen to embrace the future, and work has been done to resolve initial issues. Its prevalence indicates confidence in USB-C. It is now standard on many devices from major manufacturers like Microsoft and Intel. In fact, the European Union has proposed to have all electronic devices only fit USB-C to reduce e-waste and increase convenience. It’s only a matter of time before USB-C will be the standard.

USB-C is a forward-looking technology. It includes support for developing communication protocols that don’t exist yet, so there is room for progress. USB-C, USB-B, and USB-A differences may seem confusing, but USB-C is a huge improvement on two decades of confusion and looks set to clarify things for the future.

As we increasingly use more devices in our lives, whether for work, school, or entertainment, it is vital to know that USB-C would most likely be the port of the future. If you would like to know more about USB-C monitors, this article will guide you on what to look out for. If not, ViewSonic’s USB-C monitors are also an effective way to future-proof your desk setup.

Learn why and how a blue light filter for your PC is a good idea for both mental and physical health.

You probably use them every day, but do you actually know how LED projectors work? Discover everything you need to know about them!

What is a Digitizer?

Find out what is a digitizer and what you need to know to before making a purchase to take your career or hobby to the next level.

Monitor ports come in all shapes and sizes, but not all are equal. Read all about the display connections of the past, present, and future.