Monitor ports have changed over the years. Not only can they carry increasingly complex data, but they can also charge and power the devices that they connect. Like any technology, monitor ports are undergoing a continuing evolution to improve image quality and power efficiency.

Read more about the various monitor ports, their uses, and the next phase of connectivity in USB-C. Or learn more about ViewSonic’s solutions for education, work, and home here.

Technology evolves every day. New and improved devices, formats, and media types seem to pop up every day, too. Keeping up with it all can be a full-time job. Monitor ports are the hidden masterpieces that maximize the output of our evolving devices and media.

Today, video connectors and monitor ports are designed to be the ultimate solution. They are highly versatile in their connectivity and many serve multiple functions simultaneously.

What Are Monitor Ports?

Monitor ports are points of connection that enable various flows of data and information. It is essential to understand what monitor ports are and how they work to determine which ones will best serve your needs. Staying current with these advances in technology will ensure you can maximize the use of your device to enjoy the best digital experience.

When it comes to monitor ports, there are many options available on the market today. Ports that were once the industry standard for connection are becoming obsolete, replaced by faster, more efficient, and more compact versions. 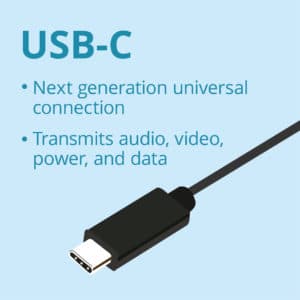 Is it possible for a single connector to become the ultimate solution and universal interface? With the introduction of the Universal Serial Bus – C (USB-C) port, this seems to be the case.

The USB-C is a 24-pin USB connector system that was developed by the USB Implementors Forum in 2014. Since then it became the industry standard connector to transmit data and power. It may be quite compact, but it is incredibly powerful, boasting an array of highly advanced features.

The USB-C is known as the all-in-one connector. It is a one-cable solution with the ability to transmit power, audio, and video across a single cable from one mighty port.

Similar in size to the USB Micro-B port, its smaller dimensions and compatibility have made it the go-to choice for smartphones.

The USB-C delivers more speed than its predecessors – it’s as much as twice as fast as the USB 3.0 port. Delivering up to 100 watts of power, the USB-C is also far more powerful than older versions of the USB. For instance, the USB 2.0 could transfer just 2.5 watts of power.

Simply put, it can power smaller devices like your smartphone, and larger devices, such as computers and laptops, which generally require 60 watts of power to charge fully. Plus, it’s bi-directional, capable of transmitting as well as receiving power.

And with this connector, enjoy its reversible orientation. This feature promotes ease of use and eliminates the need for multiple ports and cables. It also lets you easily connect the cable into the connector correctly the first time – no more struggling to find the correct orientation.

With its universality, speed, power, and versatility, the USB-C port is a popular choice for computer monitors, opening a wealth of possibilities to increase productivity and efficiency at the office. The ViewSonic VG2456 Series monitors, for example, utilize USB-C to offer an all-in-one cable solution:

Alternatively, the VP2785-4K is a powerhouse monitor featuring a stunning 3840 x 2160 resolution (4K) with multiple ports offering connections to USB 3.1 type C, as well as DisplayPort and HDMI. These advanced features and high color standards make it a perfect choice for various design professions, including photography, graphic design, video editing, and print.

With the addition of the Thunderbolt hardware interface, the already high-performing USB-C offers even greater speed. It is now the most versatile and powerful connector in today’s market. Compatible with any dock, display, or data device, Thunderbolt brings USB-C speeds up to 40Gb per second – 8x faster than the ports available on most computers today. Besides, it significantly increases USB-C power and image quality, allowing it to hold 8x as much data, and boosts image quality to 4x the bandwidth. 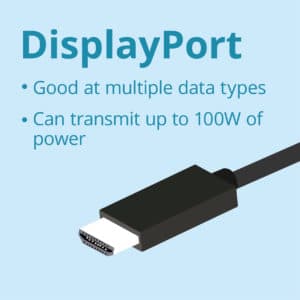 DisplayPort (DP) is a digital display interface primarily used to transmit video signals to a display unit, such as a computer monitor. DisplayPort (DP) also support audio and USB signals. Featuring a reversible orientation, the port is highly efficient and capable of transmitting a great deal of power (up to 100 watts) over a single cable.

DisplayPort was developed to replace VGA, DVI, and FPD-link. With the use of adapters, it also easily connects to other interfaces such as VGA, DVI, and HDMI.

Supporting both audio and video signal transmissions, you can quickly get more done than ever before using one powerful monitor. Flexible connectivity options make it possible.

What Is Mini DisplayPort? 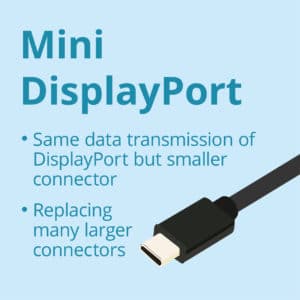 A compact, stripped-down version of the popular DisplayPort, the Mini DisplayPort (MiniDP, or MDP), is a digital audio-visual interface that was developed by Apple in October 2008. Described as “the small port that makes a big difference,” this mini version of the DisplayPort was significantly smaller than its competing predecessors. It’s even smaller than the mini DVI or USB port. This advanced, compact, and versatile port was designed to be the ultimate, universal solution. 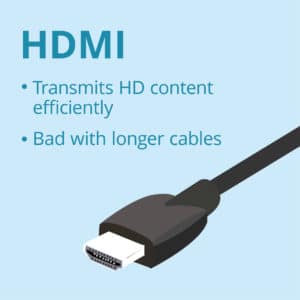 One frequently used port is the High Definition Multimedia Interface (HDMI). This digital interface supports both audio and visual signals. It’s one of the most common go-to-ports for transferring high-definition video and audio between devices through a single cable. It is a good option for connecting an HD output to an HD display without affecting high-resolution images and videos.

With the right monitor and monitor port, you can serve multiple needs to maximize your productivity at the workplace. For example, the ViewSonic VG2755-2K comes equipped with HDMI ports and a VGA input. It offers versatile connectivity options to PC’s laptops and other multimedia devices, making it an excellent choice for the office.

Capable of carrying signals with the use of inexpensive cables, and very user-friendly, HDMI has been a popular choice among interface connectors. It is now the standard for plugging a computer into a TV monitor.

HDMI ports have their drawbacks, however, which makes other options a better choice at times. The main limitation of the HDMI cable is the distance in which its transmissions can travel (about 15 meters or 50 feet is considered the upper limit). Likewise, they are quite bulky. As technology has advanced, smaller versions of HDMI cables, usually called Micro or Mini, were invented to accommodate our mobile devices and tablets, but the standard size is pretty big as far as modern cables go. 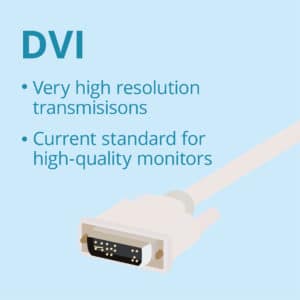 The Digital Visual Interface, or DVI for short, is a video display interface that was designed as the standard connector to transmit video signals to display devices.

Capable of carrying signals at resolutions as high as 2560 x 1600, it helped maximize the digital quality of flatscreen LCD monitors and modern video graphics cards. It has been a top choice for HDTVs and other high-end video displays for TV, movies, and DVDs, while also supporting both computer monitors and projectors. In recent years, DVI has become the standard digital interface for the computer market. 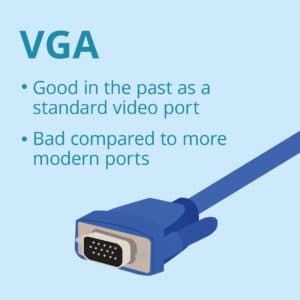 One of the oldest ports is the Video Graphics Array (VGA). Launched in 1987 by IBM, this monitor port has been the standard connector for video cards, computer monitors, laptop computers, projectors, and high-definition television sets for decades.

VGA ports are composed of 15 pins, with three rows of five pins, it can transmit RGBHV video signals: Red, Green, Blue, Horizontal Sync, and Vertical Sync. That said, VGA is limited to carrying analog signals, so it produces lower quality resolutions on screens. In recent years, it has been used far less, being replaced by faster DVI and HDMI ports, which provide higher quality resolutions and displays.

Which Port Type Is Best for Monitors?

USB-C is a truly powerful port bringing a host of its specific benefits, while also offering compatibility with other ports. Still, DisplayPort, Mini DisplayPort, DVI, HDMI, or VGA can be a better choice depending on what you are trying to achieve with your device.

Considering the direction that technology is moving in, and the speed it’s accelerating, it’s a fascinating time in which we, as consumers, need to adapt to newer technologies.

Thanks to monitor ports and the wealth of advances they offer, we can do more with our devices than ever before. The possibilities could be truly endless, even sooner than we thought.

To find a display with the right connection for you, visit our site to learn more about the available ViewSonic monitors. Or learn about how to choose a USB-C monitor here: Purchasing a USB-C Monitor – What to Bear in Mind

Before choosing the display for your needs, have a look at our Direct View LED video wall vs LCD video wall comparison.

It seems like curved screens are everywhere these days. Find out the benefits of curved monitors vs flat monitors and whether an upgrade is right for you.

Find out if a lamp-free projector is best for you with this simple comparision of lamp, laser, and LED projectors.