A high-quality computer monitor can make a major difference to your experience, regardless of whether you are using your computer for education, business or gaming purposes, but there are a huge number of different monitor features to consider. On top of this, you also need to think about which features are most important, based on your personal preferences, budget, and intended usage.

Read on for a comprehensive monitor features cheat sheet, which will examine everything you need to know so that you can improve your understanding and make more informed purchasing decisions. Or discover ViewSonic’s series of monitors here.

When looking to buy a computer monitor, it is important that you take the time to fully explore the different options available and properly compare the different monitor features. Yet, with so many different features to consider, it is easy to become confused or to find the process a little bit daunting.

In this cheat sheet, we aim to make things a little easier for you by breaking down all of the main features, while also exploring what they mean in real terms, and what their significance is. Once you are equipped with this knowledge, it should then become significantly easier to make a decision on which computer monitor you want to buy.

What is Monitor Resolution?

A pixel can be defined as the smallest area of illumination on a computer screen. Everything displayed on a monitor is made up of thousands of dots, or pixels. The higher the number of pixels, the clearer the displayed content will be.

With this in mind, the main thing to remember is that a higher resolution will produce more detail. For instance, the 1920 x 1080 resolution has a total of more than 2 million pixels, which will result in greater clarity than 1024 x 768, which has fewer than 800,000 pixels. Of course, the clarity of the display will also depend on a number of other factors too, including the resolution the content is actually intended to be viewed at.

To learn more, read “What is Monitor Resolution? Resolutions and Aspect Ratios Explained” What is Aspect Ratio?

Another term you may encounter when exploring monitor options is aspect ratio, and this refers to the ratio between the width and height of the display. It is used to provide you with a clear sense of the proportion between these two measurements. The aspect ratio is always expressed as two numbers, separated by a colon, such as 4:3.

The 4:3 aspect ratio was previously extremely common and was associated with movies, but was gradually replaced by the ‘widescreen’ 16:10 and then 16:9 aspect ratios, with the latter associated with high definition. This explains why, if you watch an older movie on a modern computer monitor, you are likely to see black bars down both sides.

To learn more, read “What is Monitor Resolution? Resolutions and Aspect Ratios Explained”

What is Frame Rate?

Frame rate is the name used to describe the frequency at which a series of individual frames change thus creating movement on the screen. The faster the frame rate is, the more changes occur and frame rate is typically expressed in frames per second (fps).

Although it is a concept that you may encounter when searching for a monitor, and while it will certainly impact upon what you see on your screen, it is important to stress that the frame rate is not actually produced by the monitor itself. Instead, it is produced by a combination of your graphics card and your processor.

In order to fully benefit from even a high-quality monitor, you are going to need to have a processor and graphics card capable of producing a decent frame rate. Without a good frame rate, you may not notice the benefits of a monitor with a decent refresh rate, and this can be especially noticeable when it comes to esports or competitive gaming. What is Refresh Rate?

Unlike with frame rate, the refresh rate is directly associated with your monitor. Refresh rate refers to the number of times the display is completely refreshed and is usually expressed in hertz (Hz). Hertz is a frequency metric, meaning cycles per second, so a refresh rate of 60 Hz would mean the monitor is refreshed 60 times per second.

One thing to note is that frame rate and refresh rate work in combination. If either your refresh rate or frame rate is too low, or if the two are too far out of sync, you are likely to experience visual problems.

If you still feel some confusion between refresh rate and frame rate, check out our article, “Frame Rate vs. Refresh Rate: What’s the Difference?”, to gain some more insights! What is Response Time?

Unlike refresh rate and frame rate, response time is a little more complex. But all of these terms work together to create overall performance of the monitor. Response time is the time it takes to shift from one color to another. This is measured in milliseconds (ms) and has two variants: black to white to black and gray-to-gray.

If you are a casual computer user, such as someone who browses the web or works in an office, response time may not be the number one feature to look at. But if you are looking for maximizing the gaming experience, aim for monitors that have response times of 5ms or less. The lower the response time, the less likely you are to experience “monitor ghosting.”

Keep in mind, if you are aiming for a lower response time, the frame rate needs to be able to keep up and oftentimes lowering the response time can cause inhibit important ergonomic features like blue-light filters and other complex image processing. When browsing monitors, you are likely to come across references to FreeSync, which is a technology developed by AMD. The basic premise behind the technology is to reduce problems like screen tearing, stuttering, and other similar issues, and these are usually caused by your frame rate and refresh rate falling out of alignment.

The technology is supported by most modern AMD graphics processing units (GPUs) and works by synchronizing your refresh rate to the frame rate that is being produced by your GPU and CPU. FreeSync is also a royalty-free technology and no additional hardware is required, which means it can be used in a wide range of computer monitors.

Another of the monitor features you may encounter when exploring options is G-Sync and this is a technology, developed by Nvidia, which aims to eliminate problems caused by frame rate and refresh rate being out of sync with one another. Again, the technology works by adapting the display’s refresh rate to match the frame rate being produced.

For example, if your graphics card and CPU are producing a frame rate of 60 fps, but your monitor has a significantly higher refresh rate, G-Sync would switch the refresh rate to 60 Hz to match the frame rate. The most significant problem this can help to resolve is screen tearing, but it may also fix other display issues too.

Unlike FreeSync, however, the G-Sync technology is not royalty-free. This means monitors using the technology must be fitted with an Nvidia proprietary module, which can make G-Sync the more expensive solution of the two. However, if you have a larger budget, G-Sync will tend to produce better results overall. At times, you may also see references to ULMB, which stands for ultra low motion blur. This is a technology offered by Nvidia, which makes use of strobe backlights in an effort to reduce motion blurring and input latency. This can be especially beneficial when playing certain games where clarity in motion is important.

One thing to keep in mind with ULMB is that it is directly connected to your computer’s frame rate and you are going to require a consistent frame rate of above 120 fps in order to fully benefit. It is also important to highlight that while it will reduce motion blur and make it easier to see fast movement, it does also slightly reduce picture quality.

Despite both ULMB and G-Sync being Nvidia technology, they cannot be used at the same time. ULMB should be your preference when reducing blurring is the main priority, whereas G-Sync will be better for maintaining a high overall picture quality. ULMB also relies upon a high frame rate, whereas G-Sync will adapt to match your frame rate. What Are Panel Types?

Different monitors make use of different LCD panel types and despite the basic technology being similar, your chosen panel type can have a significant bearing on how the display appears. The following are the main types:

IPS or in-plane switching panels are primarily characterized by the switching patterns of the liquid crystal molecules. It is a panel type that is strongly associated with excellent color display and also offers greater tolerance for viewing the display from different viewing angles when compared to many other panel types.

TN or twisted nematic panels are the oldest LCD panel type available, but they are also often the preferred choice of serious PC gamers, including esports players. This is primarily due to fast pixel response times and rapid refresh rates. Yet, a significant limitation is the way the appearance of colors can shift, depending on the viewing angle.

VA or vertical alignment panels are an LED display technology. These panels were designed to specifically address several shortcomings linked to TN technology, especially in terms of color production and viewing angle dependence. They offer excellent contrast ratios, but response times are slow, meaning they may not be ideal for gaming.

OLED or organic light-emitting diode panels represent a different kind of technology to those mentioned before. Rather than being backlit, these panels rely on charged ions to individually light up each pixel on the display. These panels offer superior contrast ratios and fast response times but are usually more expensive.

QLED or quantum light-emitting diode panels are developed by Samsung and were originally used for Samsung TVs, although they are now also used on computer monitors too. Their use of a metallic quantum dot filter allows the panels to produce excellent color and contrast, making them ideal for 4K film and TV.

Nano IPS or nano in-plane switching panels are improved IPS panels developed by LG. Essentially, the technology works by using nano-particles, which are applied to an LED backlight. In addition to the benefits typically associated with IPS panels, this offers extra brightness and an improved color gamut. 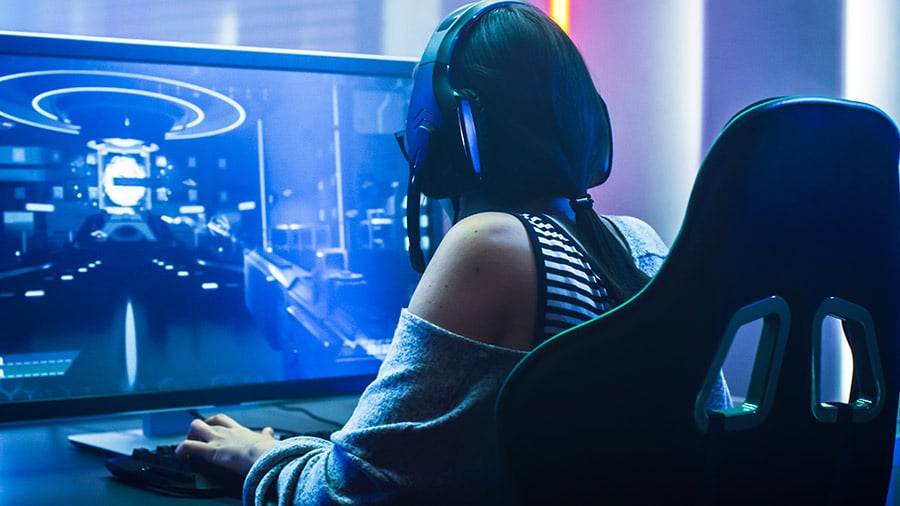 The sheer number of different monitor features you need to consider when weighing up your options can make the task seem rather daunting. Nevertheless, once you break past the jargon and complex terminology, most of these features are fairly simple to understand, and having this knowledge can make buying a computer monitor much easier.

Understanding the panel type of a monitor is equally as important as the features, you can read about the four different types here. Or learn more about ViewSonic’s monitors here.

Best Projector for Sports: The Buyer’s Guide for Sports Fans

Looking to buy the best projector for sports? Here's everything you need to know to find your perfect match!

A USB-C monitor uses the advanced and versatile USB Type-C cable. Find out more about what this connection means to you and your future monitors.

Digital transformation in schools is inevitable. Setting up and managing interactive whiteboards can be effortless with these 5 steps.

How to Extend the Life of Your Interactive Whiteboard

Prolonging the product life of your interactive whiteboards with a mini desktop PC can bring you many benefits in the long run.