Quick Links
What Is V-Sync? And Why Does It Matter?
What Is G-Sync?
What Is FreeSync?
The Next Generation of FreeSync
G-Sync vs FreeSync: Solutions to Fit a Variety of Needs
RELATED ARTICLES

When buying a gaming monitor, it’s important to compare G-Sync vs FreeSync. Both technologies improve monitor performance by matching the performance of the screen with the graphics card. And there are clear advantages and disadvantages of each: G-Sync offers premium performance at a higher price while FreeSync is prone to certain screen artifacts like ghosting.

So, G-Sync versus FreeSync? Ultimately, it’s up to you to decide which is the best for you (with the help of our guide below). Or you can learn more about ViewSonic’s professional gaming monitors here.

In the past, monitor manufacturers relied on the V-Sync standard to ensure consumers and business professionals could use their displays without issues when connected to high-performance computers. As technology became faster, however, new standards were developed — the two main ones being G-Sync and Freesync.

Before we discuss G-Sync and FreeSync technologies in-depth, let’s touch on V-Sync which was one of the earlier standards created to address the disconnect between the graphics card and display manufacturers.

What Is V-Sync? And Why Does It Matter?

V-Sync, short for vertical synchronisation, is a display technology that was originally designed to help monitor manufacturers prevent screen tearing. This occurs when two different “screens” crash into each other because the monitor’s refresh rate can’t keep pace with the data being sent from the graphics card. The distortion is easy to spot as it causes a cut or misalignment to appear in the image.

This often comes in handy in gaming. For example, GamingScan reports that the average computer game operates at 60 FPS. Many high-end games operate at 120 FPS or greater, which requires the monitor to have a refresh rate of 120Hz to 165Hz. If the game is run on a monitor with a refresh rate that’s less than 120Hz, performance issues arise.

V-Sync eliminates these issues by imposing a strict cap on the frames per second (FPS) reached by an application. In essence, graphics cards could recognise the refresh rates of the monitor(s) used by a device and then adjust image processing speeds based on that information.

Although V-Sync technology is commonly used when users are playing modern video games, it also works well with legacy games. The reason for this is that V-Sync slows down the frame rate output from the graphics cards to match the legacy standards.

Despite its effectiveness at eliminating screen tearing, it often causes issues such as screen “stuttering” and input lag. The former is a scenario where the time between frames varies noticeably, leading to choppiness in image appearances.

V-Sync only is useful when the graphics card outputs video at a high FPS rate, and the display only supports a 60Hz refresh rate (which is common in legacy equipment and non-gaming displays). V-Sync enables the display to limit the output of the graphics card, to ensure both devices are operating in sync.

Although the technology works well with low-end devices, V-Sync degrades the performance of high-end graphics cards. That’s the reason display manufacturers have begun releasing gaming monitors with refresh rates of 144Hz, 165Hz, and even 240Hz.

Since the creation of V-Sync, other technologies such as G-Sync and FreeSync have emerged to not only fix display performance issues, but also to enhance image elements such as screen resolution, image colours, or brightness levels.

Those things in mind, let’s take a closer look at the G-Sync and FreeSync standards so you can choose the monitor that is right for you.\ 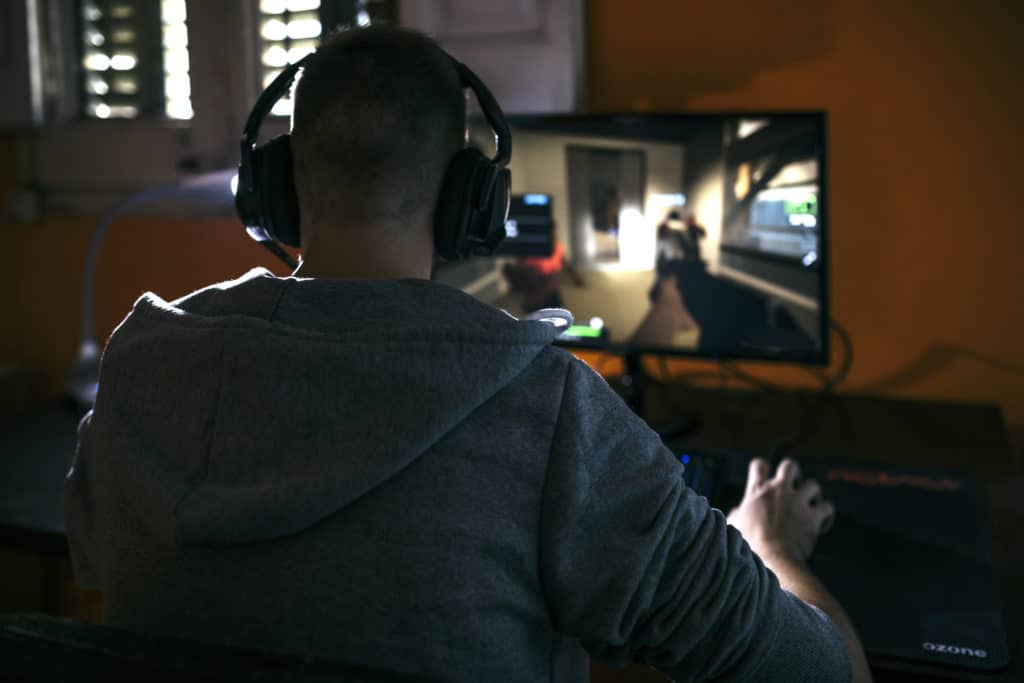 Released to the public in 2013, G-Sync is a technology developed by NVIDIA that synchronises a user’s display to a device’s graphics card output, leading to smoother performance, especially with gaming. G-Sync has gained popularity in the electronics space because monitor refresh rates are always better than the GPU’s ability to output data. This results in significant performance issues.

G-Sync ensures that when the GPU speed is out of sync with the monitor refresh rate, the graphics card adjusts its output rate.

For example, if a graphics card is pushing 50 frames per second (FPS), the display would then switch its refresh rate to 50 Hz. If the FPS count decreases to 40, then the display adjusts to 40 Hz. The typical effective range of G-Sync technology is 30 Hz up to the maximum refresh rate of the display.

The most notable benefit of G-Sync technology is the elimination of screen tearing and other common display issues associated with V-Sync equipment. G-Sync equipment does this by manipulating the monitor’s vertical blanking interval (VBI).

VBI represents the interval between the time when a monitor finishes drawing a current frame and moves onto the next one. When G-Sync is enabled, the graphics card recognises the gap, and holds off on sending more information, therefore preventing frame issues.

To keep pace with changes in technology, NVIDIA developed a newer version of G-Sync, called G-Sync Ultimate. This new standard is a more advanced version of G-Sync. The core features that set it apart from G-Sync equipment are the built-in R3 module, high dynamic range (HDR) support, and the ability to display 4K quality images at 144Hz.

Although G-Sync delivers exceptional performance across the board, its primary disadvantage is the price. To take full advantage of native G-Sync technologies, users need to purchase a G-Sync-equipped monitor and graphics card. This two-part equipment requirement limited the number of G-Sync devices consumers could choose from It’s also worth noting that these monitors require the graphics card to support DisplayPort connectivity.

While native G-Sync equipment will likely carry a premium, for the time being, budget-conscious businesses and consumers still can use G-Sync Compatible equipment for an upgraded viewing experience.

Released in 2015, FreeSync is a standard developed by AMD that, like G-Sync, is an adaptive synchronisation technology for liquid-crystal displays. It’s intended to reduce screen tearing and stuttering triggered by the monitor not being in sync with the content frame rate.

Since this technology uses the Adaptive Sync standard built into the DisplayPort 1.2a standard, any monitor equipped with this input can be compatible with FreeSync technology. With that in mind, FreeSync is not compatible with legacy connections such as VGA and DVI.

The “free” in FreeSync comes from the standard being open, meaning other manufacturers can incorporate it into their equipment without paying royalties to AMD. This means many FreeSync devices on the market cost less than similar G-Sync-equipped devices.

Although FreeSync is a significant improvement over the V-Sync standard, it isn’t a perfect technology. The most notable drawback of FreeSync is ghosting. This is when an object leaves behind a bit of its previous image position, causing a shadow-like image to appear.

The primary cause of ghosting in FreeSync devices is imprecise power management. If enough power isn’t applied to the pixels, images show gaps due to slow movement. On the other hand, when too much power is applied, then ghosting occurs.

The Next Generation of FreeSync

To overcome those limitations, in 2017 AMD released an enhanced version of FreeSync known as FreeSync 2 HDR. Monitors that meet this standard are required to have HDR support; low framerate compensation capabilities (LFC); and the ability to toggle between standard definition range (SDR) and high dynamic range (HDR) support.

A key difference between FreeSync and FreeSync 2 devices is that with the latter technology, if the frame rate falls below the supported range of the monitor, low framerate compensation (LFC) is automatically enabled to prevent stuttering and tearing.

As FreeSync is an open standard – and has been that way since day one – people shopping for FreeSync monitors have a wider selection than those looking for native G-Sync displays.

G-Sync vs FreeSync: Solutions to Fit a Variety of Needs

If performance and image quality are your top priority when choosing a monitor, then G-Sync and FreeSync equipment come in a variety of offerings to fit virtually any need. The primary difference between the two standards is levels of input lag or tearing.

If you want low input lag and don’t mind tearing, then the FreeSync standard is a good fit for you. On the other hand, if you’re looking for smooth motions without tearing, and are okay with minor input lag, then G-Sync equipped monitors are a better choice.

For the average individual or business professional, G-Sync and FreeSync both deliver exceptional quality. If cost isn’t a concern and you absolutely need top of the line graphics support, then G-Sync is the overall winner.

Choosing a gaming monitor can be challenging, you can read more about our complete guide here. For peak graphics performance, check out ELITE gaming monitors.

You probably use them every day, but do you actually know how LED projectors work? Discover everything you need to know about them!