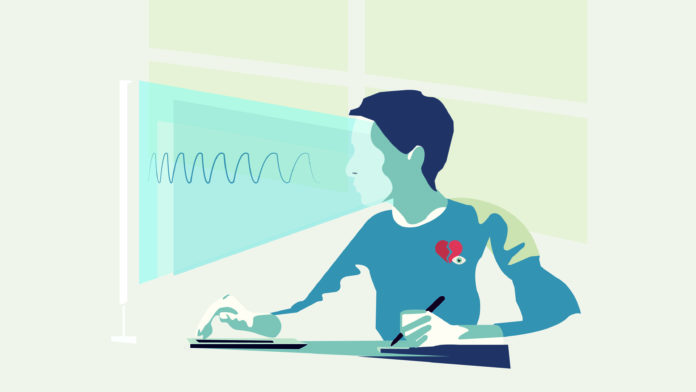 Quick Links
What Is Blue Light and Is It Really Evil?
Why Do Computer Screens Emit so Much Blue Light?
5 Quick Steps You Can Take Right Now to Configure Your Workstation to Protect Your Eyes
What Is a Blue Light Filter for a PC and How Does It Work?
Go the Extra Mile

Modern screens produce a lot of blue light. That light affects eye health and sleep, so it’s a good idea to reduce excessive blue light with options like a blue light filter for your PC. Unfortunately, that blue light can cause eye strain, interrupt sleep, and more. But with a couple of simple precautions, there’s no reason to fear your screen.

Read our quick guide on how blue light affects your eyes and how to protect your vision. Or discover ViewSonic’s monitors engineered with ultimate eye comfort here.

What is blue light? Have you noticed that your eyes get tired when you spend too much time in front of the computer? Sure you do, since you are the one who has to deal with the headaches, the super dry eyes, and even blurred vision at times.

What you may not be aware of though, is the impact it has on your vision, your sleep, and your health, as well as how you can immediately protect yourself by using a blue light filter.  You’ve seen that when people use their electronic devices in a dark environment, they are covered in a blue glow.

That’s high energy visual (HEV) light ready to disrupt everyone’s sleep.  While eye fatigue and sleep trouble may be the most commonly experienced problems, many other health issues are linking to blue light exposure. That’s why, below, we’ve endeavored to outline everything you need to know regarding blue light and blue light filters.

What Is Blue Light and Is It Really Evil?

Consider light as electromagnetic radiation with an enormous range in terms of frequency, energy, and wavelengths – from gamma (as tiny as 1 trillionth of a meter) to sub radio (as big as the universe since there’s no theoretical upper limit).

Somewhere between the two extremes exists the very tiny fraction human eyes can detect, which is known as the visible spectrum, with wavelengths in the range of 400 nm to 700 nm. What else is measured in nanometers? Transistors! Back in 1994 and 1995, the smallest transistors were 600 nm and 350 nm, respectively. Fast forward to 2018 when the Apple A12 Bionic chip was released containing 6.9 billion transistors manufactured using a 7 nm process.

Various technologies that light up the displays of the electronic devices use wavelengths in this range. However, the biggest source of blue light is the sun, which is known to be crucial in many ways. As such, it’s fair to ask, how bad can blue light truly be?

On an evolutionary scale, not long ago humans lived outdoors and were ruled by the sunrise and sunset. That’s why a blue-light-sensing protein called melanopsin exists in human eyes. The bright daylight activates melanopsin, thus synchronizing the internal clock to raise alertness, boost reaction times, and mood. However, melanopsin is less sensitive to lower energy light in the visual spectrum, which allows for the production of a sleep-inducing hormone called melatonin as the sun goes down.

The problem at hand is that 90% of our time is now spent indoors under artificial light, thereby resulting in a deficit of direct sunlight during the day and overexposure to bright light in the evening. This combination has resulted in consequences to the natural circadian rhythm – or the master clock – of the human body. Unsettling the circadian rhythm paves the way to many of the prevalent diseases experienced in the 21st century, such as depression, anxiety, and obesity.

Although inconclusive, scientific studies also suggest a connection between blue light exposure and macular degeneration, which the leading cause of vision loss in the US! As the years go by, the natural protective layer starts to become more and more permeable to UV and HEV rays that easily penetrate to the retina due to their shorter wavelengths.

In recent news, a Taiwanese woman developed a hole in her retina after years of using a smartphone outdoors and Dr. Hong, a doctor of Ophthalmology at Fooyin University in Kaohsiung, believes that the combination of the blue light emitted from the cellphone, and the ultraviolet light emitted by the sun led to this condition.

It seems as though blue light is both extremely beneficial and extremely dangerous. The best thing to do is to find ways to optimize the blue light intake during the day and regulate the exposure as the sun goes down. Thankfully, even NASA is invested in helping with this!

Why Do Computer Screens Emit so Much Blue Light?

Most computer screens today use a type of panel with layers of liquid crystals between pairs of filters and electrodes. These are known as LCDs, short for “Liquid Crystal Displays.” LCD panels require an external source of light to produce visible images. As such, LEDs are now the industry favorite for the task, after dethroning CCFLs due to size, efficiency, and cost.

The array of LEDs is often placed behind the panel or around the edges of the screen providing a bright light source. The most common type is referred to as white-light LEDs, and they combine the emission from a blue LED (around 450nm to 470 nm) with a yellow phosphor. This combination looks white when viewed directly and it’s the reason why so much blue light is being emitted from computer screens and other electronic devices.

To make matters worse, white-light LEDs are known to suffer from degradation over time, thereby causing an increase of blue emission. This degradation happens primarily through the bleaching of phosphors so that they no longer efficiently absorb blue light, thus leading to further eye strain.

1. Invest in a Computer Equipped with a Built-in Blue Light Filter

Nearly every ViewSonic model is equipped with a blue light filter capable of reducing up to 87% the emission in the blue spectrum while maintaining the correct color balance.

2. Proper Lighting in the Room

Use dim, indirect lights and reduce possible glare, as well as reflections.

Reduce display brightness and maintain the screen to be just slightly brighter than the ambient lighting.

Use strong contrast for superior comfort and utilize the night mode when available (dark background with white font).

Use a warmer color profile with more red and less blue.

What Is a Blue Light Filter for a PC and How Does It Work?

You are now fully aware of the different sources of blue light as well as the various health risks associated with it, so if you want or need some computer time after sunset hours, you would be wise to invest in a blue light filter for your PC.

For starters, and depending on your operating system, you may have the option to turn on Night Light (Windows 10) or Night Shift (macOS). Nevertheless, a recent study on the lack of effectiveness of Apple’s Night Shift regarding melatonin production may be a strong enough reason to consider other options.

Such options include computer screens with integrated blue light filters capable of reducing up to 87% of all blue light emissions and allowing for maximum user customization with different levels of protection and accurate RGB color balance.

This technology allows you to easily adjust the amount of blue light that is being emitted using a scale from 0 to 100 (where 0 represents the minimum level of blue light emission, meaning 87% of all blue light is being filtered out).

You can set the filter to different levels depending on the viewing scenario. Most users prefer to max out the filter (0-25) when reading or using text-based applications, making it easy on the eyes.

For web browsing or work-related tasks, you might want to allow in some more blue light by setting the filter to 25-50. These daily activities should remain comfortable with this level of blue light reduction.

When the main activity is related to high-definition multimedia, you can set the filter to 50-100. At 70 you receive better color balancing with sufficient blue light reduction without visible change in color.

As mentioned above, NASA developed special LED modules for the ISS (International Space Station) in order to help keep astronauts healthy during their stay in outer space. The former NASA scientists who came up with this ingenious solution are now devoted to bringing the same technology to the general public. These modules shift the peak output according to the time of the day and use an emission spectrum that closely imitates that of the sun during the day, while eliminating the short wavelengths from blue and green light when in pre-sleep mode.

Other valid alternatives, if your primary purpose is to reduce digital eye strain, include the use of third-party software such as f.lux or Iris, as well as blue light blocking eyewear. Please refer to a professional when choosing eyewear that filters or blocks blue light as these products may include magnification and specific optical centers.

Although proper eyewear seems to be most effective against the harmful effects of blue light, there are at least three aspects to consider. First of all, the price, which is heavily dependent on the quality of the lenses. Secondly,  the fit, which needs to be tight or else blue light still reaches the eye. Lastly, most blue light blocking glasses are difficult to use when overlaid against regular prescription glasses. All in all, PC monitors with built-in blue light filters present the most convenient solution when compared to these options.

Adding to the convenience of a built-in blue light filter, wouldn’t it be great to use the monitor as a docking station? ViewSonic VG55 Series monitors feature USB Type-C connectivity, the best modern-era solution to transfer data, video, audio, and power through a single cable.

Studies say blinking rates drop to one-third of normal when in front of a screen. For sure, that does not help with eye strain. With that in mind, consider the famous eye care rule called 20-20-20 according to which every 20 minutes you should focus for 20 seconds on any object 20 feet away from you. This simple exercise helps with headaches, blurred vision, double vision, and dry eyes.

Another perfectly valid way to give your eyes some well-deserved rest while staying productive during long hours in front of a computer display is using the Pomodoro Technique. This technique breaks down the day in 25-minute sprints with small breaks in-between. These breaks help the brain to process new information, and since blue light will not be received during that time, it also helps prevent digital eye strain.

Although the use of any form of the blue light filter may be helpful, one sure way to reduce digital eye strain and improve the quality of sleep is to avoid using the computer, smartphone, tablet, or TV for 30 to 60 minutes before bed. Or equip yourself with ViewSonic’s monitors with low blue light technology here. How to Optimize Collaboration in Remote Teams What is an IPS Monitor? Monitor Panel Types Explained

Touchscreen Monitors for Teaching at Home

What is a Wireless Presentation Display?