While a backlit RGB gaming monitor is primarily a cosmetic effect, it can also have an effect on the gaming experience in unexpected ways. From improving contrast to reducing eye strain, the RGB LEDs on the back of gaming monitors have a practical function.

Find out more about how form meets functions in RGB gaming monitors, or take a look at the Elite Gaming series.

Thinking of upgrading to an RGB Monitor? A monitor occupies a prominent position on any gaming setup. So why keep it so dull compared to other modern components? In fact, choosing an RGB Monitor over a traditional one is a significant improvement in both function and aesthetics.

The market is in love with RGB LED Monitors, but one can argue that some of the applications of these RGB lighting systems are questionable (to say the least). It might strike you as a surprise at first, but an RGB Monitor is one of the few peripherals where RGB lighting actually makes sense.

For one, would you like to automatically see an enhancement in terms of picture quality without going through the hassle of configuring all the monitor settings? If so, follow along as we explore that, and much more on the topic of RGB Monitors and understand if it is something you need to add to your gaming setup.

What Is This RGB Monitor Technology Everyone Is Talking About?

To put it simply, an RGB Monitor is a computer screen equipped with a lighting system that illuminates the backside of the monitor – usually against a wall – and has the ability to display any RGB color of your liking.

This trend is slowly picking up momentum inside the gaming community. The logic behind this application has been proven to work from years of DIY projects as well as some commercial TVs. Any innovation moving the computer monitor space forward is very welcome because compared to other devices and even different types of displays; it hasn’t enjoyed the same explosive curve of evolution. However, it is impossible to deny how elegantly curved monitors like the ELITE XG350R-C look and how smooth games run on the ELITE XG240R with 144Hz.

The RGB lights are everywhere on a desktop computer if you have been shopping in the last few years. From obvious choices such as chassis to more obscure inventions in the likes of mousepads and gaming chairs capable of full-blown RGB light spectacles.

The User Experience with and Without an RGB Monitor

Imagine yourself sitting on a comfortable racing chair ready to start playing your heart out at your favorite game. Notice how the only light available is the one coming from the computer screen, flashing in all kinds of colors and directly penetrating your retina. One of the beautiful things about Nature is its clear bias for balance, and if you keep the image of this room in your mind for one more second, it should be pretty clear that something is horrendously out of balance. Now, what if RGB LEDs are shining being the screen reducing the brightness disparity between the monitor and everything else?

You can feel your eyes much more at ease with this new lighting arrangement while your viewing experience also improves. Although you are not yet sure why that happened, the blacks seem deeper, stronger. Everything looks terrific until you suddenly realize RGB LEDs are very limited on what they can offer because they are either they are all on or all off. So, is it possible to make the RGB LEDs just a little bit smarter?

How Does an RGB Monitor’s Ambient Backlighting Work?

RGB LEDs are a common solution found in most DIY bias lighting projects. They work, they are affordable, but they are dumb. However, there is a much better way of doing it utilizing ARGB, the short for Addressable RGB.

As this is one of the critical differences between a gimmick and an effective ambient RGB lighting, it is important to understand how RGB and ARGB LEDs work.

For starters, an RGB LED is a package housing a Red, a Green, and a Blue LED. Each one of the smaller LEDs inside the package is powered independently. Theoretically, it is possible to create all the colors on the visible spectrum. They are limited because the whole array of LEDs can only display one color at a time and use the same effect because there is only one IC controlling the array.

ARGB LEDs are slightly more expensive and complex. In this case, each LED can be individually controlled, allowing for all kinds of color combinations and virtually unlimited lighting effects. That is the only way to enjoy some of the benefits of having an RGB Monitor in the first place.

1. RGB Monitors Can save Your Eyes

The item number two on the list of 5 quick steps you can take to protect your eyes against eye strain is related to proper lighting in the room. The soft light from an RGB Monitor is incredibly effective in providing a pleasant indirect light while avoiding glare and reflections resulting in less eyestrain during long hours of computer usage.

There are two classical types of photoreceptors in the human eye, known as the rods and the cones, which functions include sending signals to the muscles in the iris. Depending on the signal, the iris expands or constricts, reducing or increasing the size of the pupils to regulate the amount of light that reaches the retina. To understand the benefits of a well-thought-out RGB Monitor is critical to note that the rods are very sensitive to light and thus are used under low light conditions whereas the cones are used under high light conditions.

When you are staring at a rectangle that is the only light source in the room, emitting amounts of light that vary every split second, your eyes are hard at work for long periods, and that is one of the reasons for fatigue and eye strain. The ambient display backlighting you get from an RGB Monitor is a fantastic way of maintaining a more consistent level of light around the room to help your eyes.

Would not all that additional light result in a worst perceived image quality? On the contrary, blacks on the screen in contrast to a dark background wall look washed-out compared to blacks on a lighter background. Rich, deep blacks are just mesmerizing to look at on computer screens and smartphone displays. Multiple optical illusions play tricks in our minds by completely altering the color of a given object only by changing the color of the background.

A bonus effect caused by the soft light aura visible around an RGB Monitor is that it makes the screen look bigger without the steep price difference, nor the decrease in pixel density.

The number of headaches you avoided by using an RGB Monitor to reduce your eye strain, might be equal to the number of headaches you’ll have to endure if you go for RGB LEDs everywhere on your gaming setup. Ideally, you want to synchronize or combine them in a way, and ELITE RGB Alliance Software is an easy way to do that with integration between ViewSonic and other manufacturers like CoolerMaster, Razer, and Thermaltake that boast some of the most widely adaptable customizable RGB lighting systems in the gaming community.

Even the installation is super easy, and the first step is to connect a USB cable (provided) between the computer and the monitor. Next, use the OSD control button on the screen to navigate to the Setup Mode and turn on the option “ELITE RGB.” From here on out, depending on what RGB components you fancy, you’ll be using one of the partners’ software: MasterPlus+, Chroma or TT RGB Plus. These are powerful RGB lighting ecosystems where the list of compatible devices grows regularly.

This alliance will push the limits of your imagination on how much it’s possible to accomplish with an RGB Monitor. You can go for basic options where all the RGB-enabled components follow a particular effect and color scheme or expand the functionality by tying the lighting color to specific computer status metrics such as temperature or usage. Gaming-wise, a popular option is having the RGB Monitor lighting following to the colors on the screen or display game-related alerts such as health or available ammunition.

The Downsides of an RGB Monitor or TV with Ambient Light

On a handful of online reviews, users mention that bias lighting, in general, can be distracting at times. This should only be the case if you go absolutely crazy on lighting effects and fail to establish any connection to what you see on the screen. However, reviewers that are more conscious reiterate the benefits of the technology explained above and cannot imagine going back to a traditional monitor after trying an RGB Monitor.

Ambient lighting cannot be overlooked if you are trying to improve your viewing experience on a computer screen or even on a TV. However, the price impact of third-party solutions is significantly higher when compared to native RGB Monitors like the ViewSonic ELITE XG240R and the ViewSonic ELITE XG350R-C.

Rapid Fire Round about RGB Monitors

Taking everything we have talked about thus far into consideration, there are only a few questions we have left to answer. When it comes down to it, here’s the simple truth about RGB ecosystems:

Are they necessary? No, not at all.

But are they cool? YES.

Can they be a great addition to your gaming atmosphere? Absolutely!

Seeing a PC set-up (especially a custom-built one) with an RGB ecosystem in full display is immediately impressive. It is a way to showcase your pride in the work you’ve put into your PC.

In addition, as we have learned today, an RGB ecosystem really is not difficult to acquire.

The fact of the matter is, you can take your PC from just “functional” to “functional AND beautiful” with ease!

So if you’re looking to show off your pride in your PC, or even if you solely want to create a beautiful external custom display, then an RGB ecosystem seems right for you! 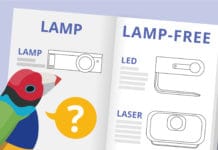 What Is A Smart Projector? (And Why You’ll Want One)