Why does my TD2220 randomly receive touch signal and respond accordingly while exposed to sunlight?

TD2220 is an optical touch monitor which uses two CMOS cameras (optical sensors) placed in the corners at the top of the screen as well as three reflectors (light strips).

These cameras are used to look across the entire touch surface for touch events.

When an object touches the screen, it blocks some of the light being received by the sensors in the cameras.

The location of the touch is then calculated by using the information from both cameras and the mathematical principles of triangulation. 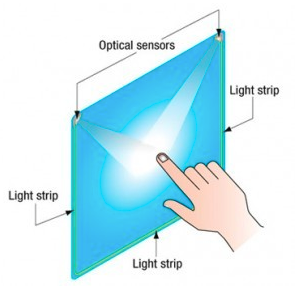 1. Entire screen including the corners is sensitive to touch

2. Images are crystal clear because no coating is used on the panel

3. Panels last for a long time as only a light touch is needed to register an input

5. Scales with perimeter and not area

However, even with those pros, there’s also some cons.

Performance may be interfered/affected by direct sunlight or reflections from wet or shiny surfaces.

That’s why it’s observed to receive touch signal randomly while exposed to sunlight.

Contact Us directly if you’re unable to get the answers and solutions for your ViewSonic products.